Malta: The Island of Corsairs – The True Story

30th August 2018By MartinaPosted in Experiences

Have you ever wondered what’s the real story of the corsairs of Malta? Maybe the Maltese weren’t just the victims after all… Here are some crazy stories that you’ve never heard before!


When it comes to corsair or pirate history of Malta I know very little about this subject. So when I was invited by The Real Malta Tours to learn more about the history of the Maltese corsairs I thought, why not?! It is a pretty new guided walking tour around Valletta. The first of its kind in Malta, that takes you through the quite shocking history of the corsairs of Malta. 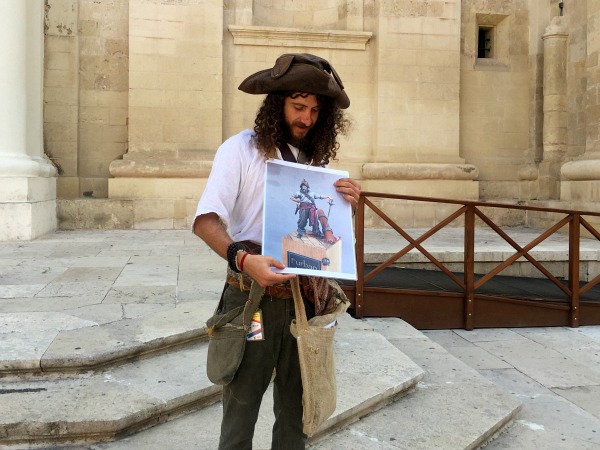 We met in front of the St. John’s Co-Cathedral in Valletta at 10am. The tour started with a brief introduction to the history of the corsairs in Malta using a couple of visual aids for better understanding. Before moving to the next stop Chris, or rather Lieutenant ‘Xandru Galea’ a fictional Maltese corsair tour guide, also explained how the tour is organised and what to expect.

The Knights decided to regulate the corsair ‘business’ and everyone fell under the regulation of this court (picture below). The corsairs had to pay their fair share to Grandmaster. What exactly was a ‘fair’ share? And how exactly does one regulate a ‘motley crew’ who steals for living? 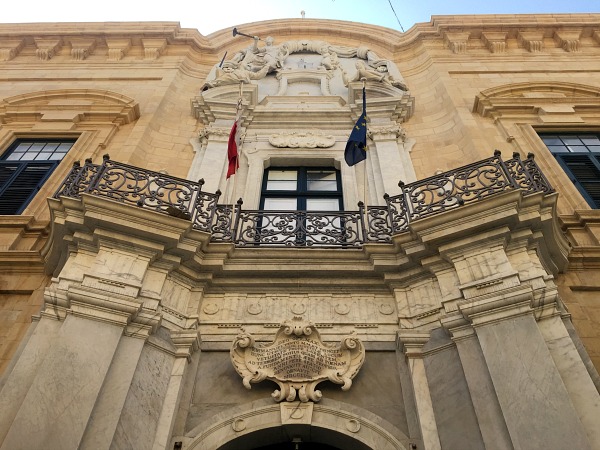 Maltese corsairs were arguably some of the most organised corsairs in the Mediterranean! Just how big was this industry? Well.. let‘s just say Malta’s Grand Harbour was a very busy port ! Especially in summer! As corsairing was seasonal. Out at sea during the sailing season, whilst farming or other less dangerous activities for the rest of the year. It was a huge business for Malta in those days, much more than many would like to admit! But did it stop with just with local Maltese joining the corsair ranks?

This podium that you can see below, is not missing a statue of a saint as you may expect. It was used to ‘midly‘ punish and humilate sinners in public. Beware, you will taken aback how these ‘beloved’ Knights were really not saintly or forgiving at all with other punishments. However that I would leave to ‘Xandru’ to explain. As that’s way too shocking to write it here! 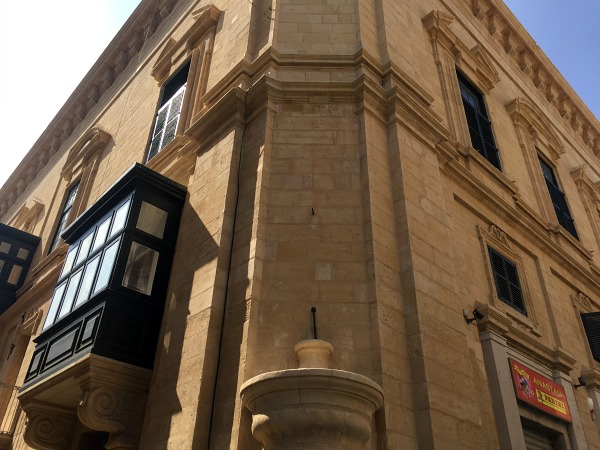 It might also come as a surprise that the Knights were not only Hospitallers but also corsairs themselves. They were fighting the corsair war against the Ottoman Empire together with the Maltese corsairs. Is it any surprise that Malta was to witness one of the bloodiest sieges ever, that we all know as the famous Great Siege of Malta. Little known and highly entertaining was the part played by the Maltese corsairs contribution in this Siege.

The corsairs also had to follow certain instructions. Where and who to attack. They couldn’t just attack anyone. Yet what happens when the rules get twisted or broken? Does the end justify the means? One thing is certain, Corsairing caused a lot of problems and internationally annoyed many other big players of the time… Want to know more? Attend the tour! 🙂 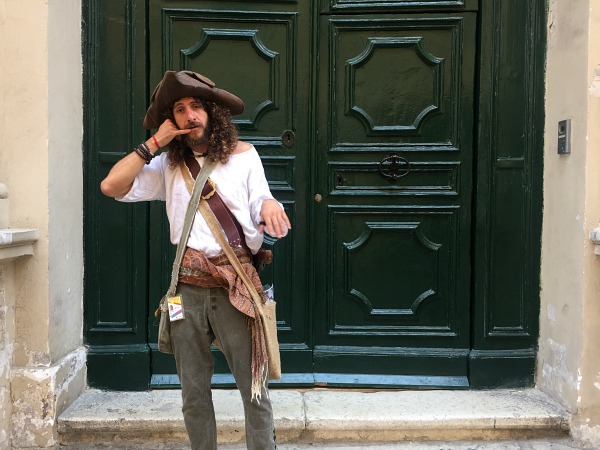 Here we are at the newly restored Valletta Food Market (Is-Suq tal-Belt). This was our quick stop for some refreshment or to use the bathroom. However, this Food Market also has a story to tell. Nowadays it serves as a place to meet and have something nice to eat. At the time of Knights one could buy a lot of local goods at the market, One of the very expensive things to get here were exotic goods coming from all over the world across the oceans: Africa, Far East and America. Yet, another piece of information shared by Xandru about goods sold here is about the greatest of all treasures on board corsair ships to be brought in, something that I would have never imagined! 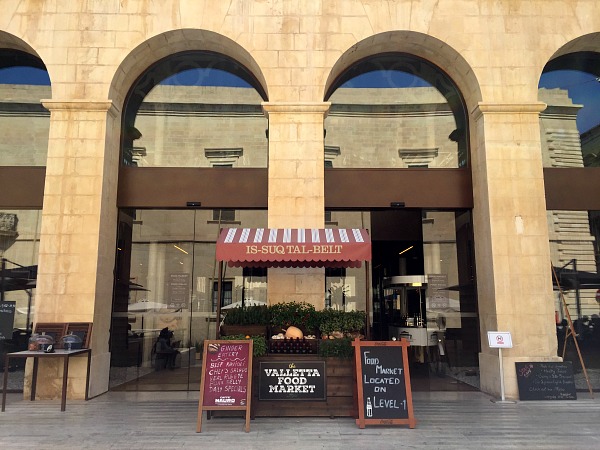 This time we stopped in front of the church of St. Dominic, also known as the Basilica of Our Lady of Safe Haven. Every ship leaving the Grand Harbour would salute to the Madonna to get the blessing and return back safely. The well-known church by the sailors. But there is a ‘darker’ story related to this church as well. Quite a juicy one, which Xandru will tell you more about during the tour.

I’m going to stop at this point not to reveal too much from the tour itself. What else will you find out during The Real Malta Tour? For example, who was the first nation in Europe to commerce coffee? Who was essential for Americans to gain their independence? Slavery? How about prostitution and other pleasures? You will get all the answers to these questions and much more during The Real Malta Tours! 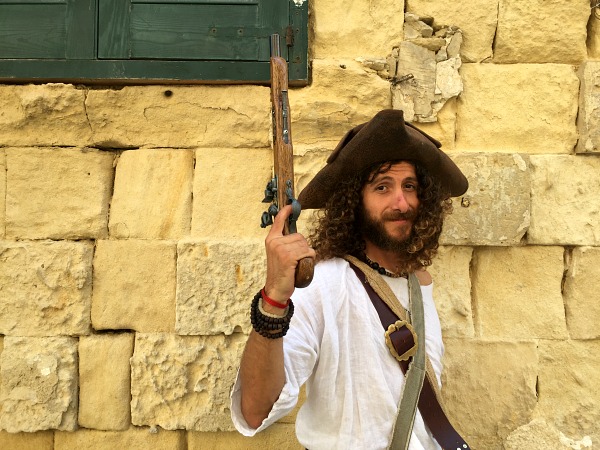 Let me finish off with a short introduction of the two guys who are behind these corsair tours. Here my guide for the day – Chris. A tour guide by profession with over 12 years of experience. Chris is a great example that proves if you love what you do, it shows and pays off. The tour was very interesting and kept me engaged for the entire 2 hours! I wanted to know more and asked a lot of questions! So many totally new perspectives of what I though I knew emerged from this tour. I had great time. Chris keeps you hooked and entertained. 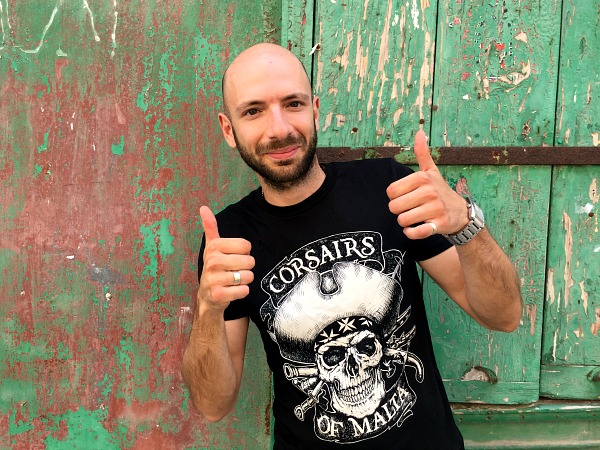 This is Giacomo. An accountant and auditor by profession, but a corsair by passion. Giacomo is the brain behind The Real Malta Tours. His passion for the corsair history goes back 7 years ago when he read a book ‘Pirate’ by Richard Platt. Since then Giamono has been hooked and became an expert in this field. In 2018 he finally managed to make his dream a reality. Turning his hobby into a business by offering specialized guided tours. I love seeing people with such a great enthusiasm, who follow their passion! Well done and keep up the good work! 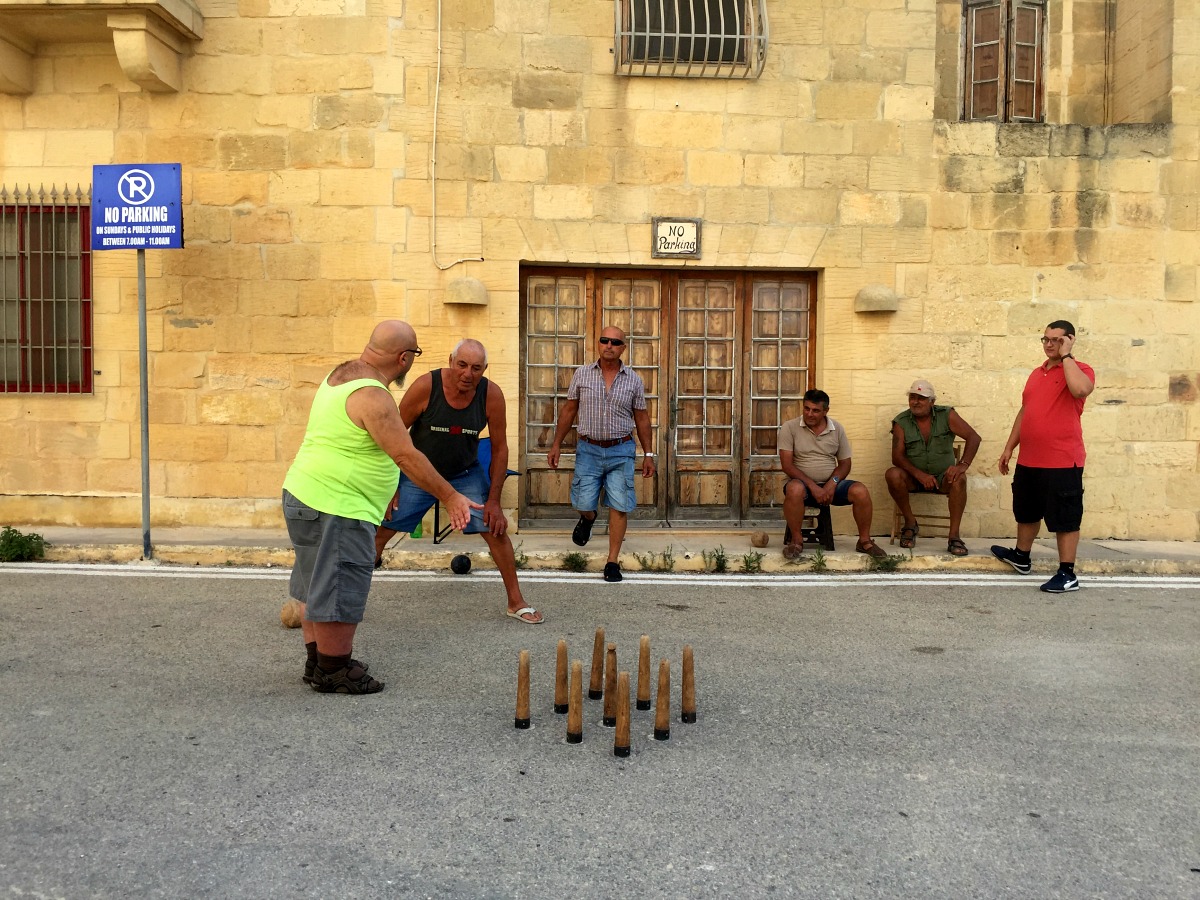 Discover the extraordinary game of ‘brilli’ that is nowadays only played in the village of Gharb, Gozo by handful of men. This unique game of ancient skitters is 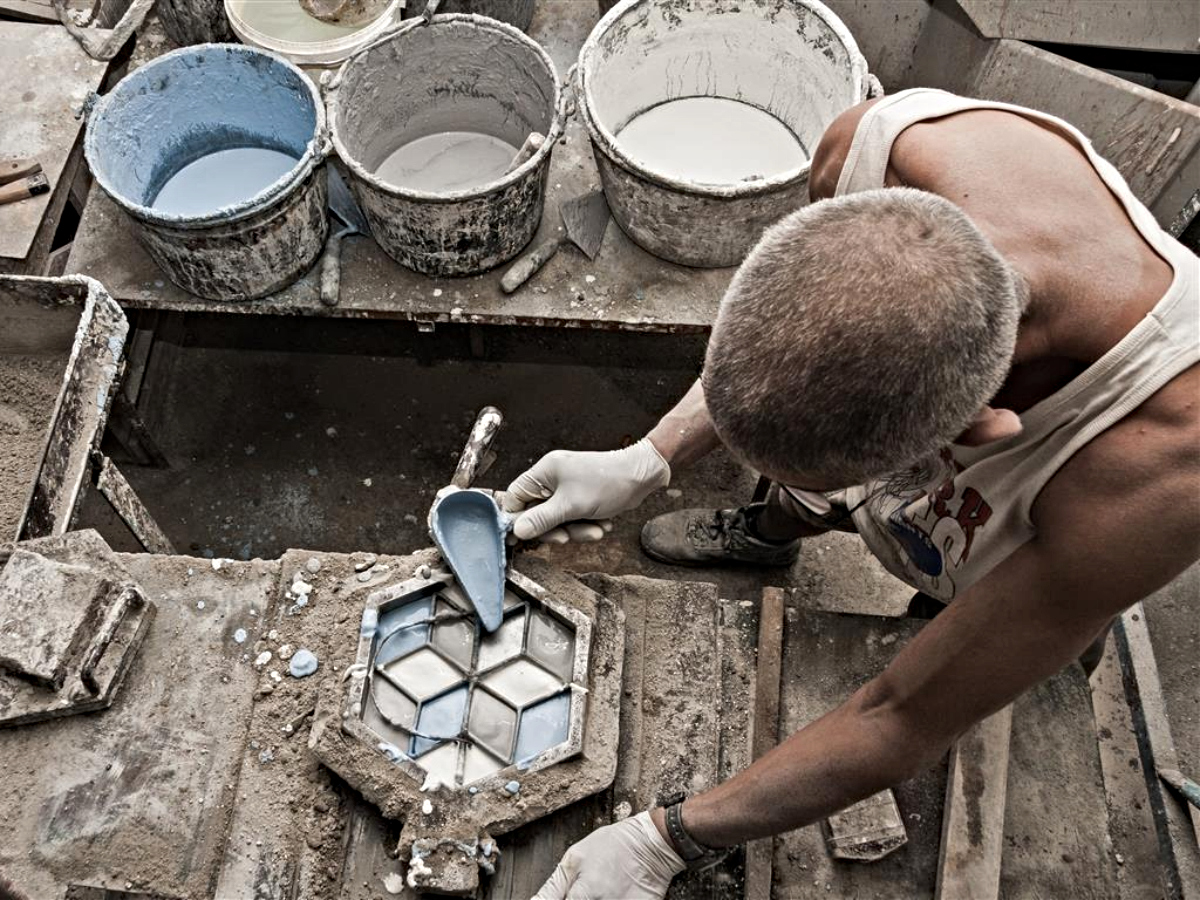 I’m sure you’ve already had a chance to admire some of the traditional Maltese tiled floors. But have you ever wondered how are these traditional patterned tiles made?

3 thoughts on “Malta: The Island of Corsairs – The True Story” 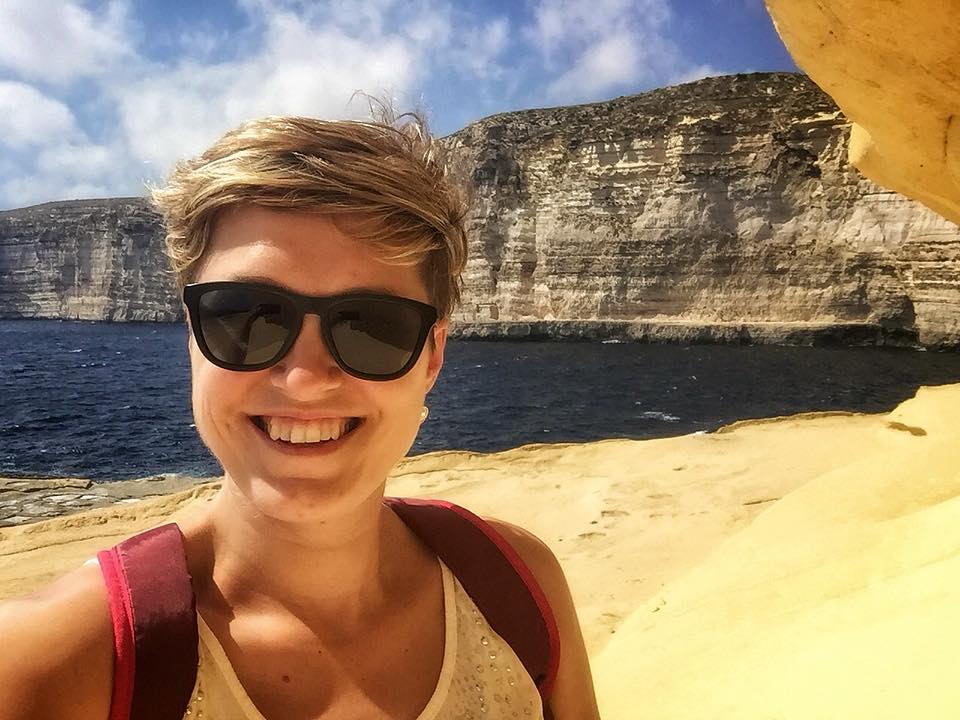 Czech expat living in Malta and looking to rediscover what made me fall in love with the island over 10 years ago. 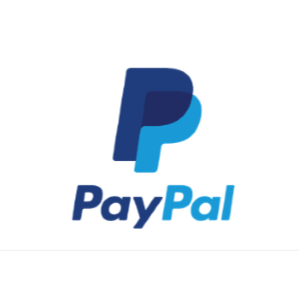 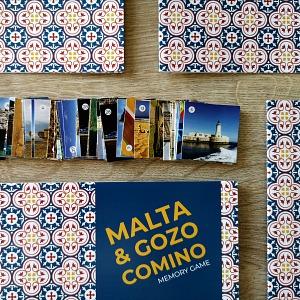