Before I even start, I have to say that this is ‘the best value for money’ museum I have ever been to! The adult admission is ONLY €5 and what you get to see is unreal! I have to admit, I’m not a huge museum goer, but I was honestly surprised by the size of this museum and how much it had to offer!

It also is a great ‘hiding place’ if you are looking for new ways how to escape the strong summer sun! So if you are in Malta on holiday or you are just thinking of what to do over the weekend, this could be a great option!

You might have already discovered, that the facades of the Maltese houses are very deceiving and you cannot really tell what to expect to see once you walk through the door. The Wignacourt Museum is a great example! Simple baroque facade is hiding outstanding exhibitions.

Wignacourt Museum is a museum in Rabat, that is housed in an 18-century Baroque building. It formerly served as a residence of the Chaplains of the Knights of St John. The museum is named after Grand Master Alof de Wignacourt who ruled over the Maltese Islands between 1601 – 1622.

The building was fully completed in 1749 and it consists of three levels: the underground level is comprised of a labyrinth of Punic, Roman and Christian Hypogea as well as a complex of World War II shelters.

On the ground floor level one can find a number of rooms used as offices and minor collections on one side with a spacious garden with a cafe on the other. This used to serve as the refectory of the Chaplains of the Order in the past.

And the first floor is the main exhibition space. It has an impressive picture gallery with works by Mattia Preti, Antoine Favray, Francesco Zahra and other Maltese as well as European Artists.

But let’s start with the underground first. 🙂

The Wignacourt Museum allows you to go down into St Paul’s Grotto through an underground passage. It is believed that St Paul’s Grotto is the place where St Paul the Apostle stayed for about three month after getting shipwrecked in Malta. He began preaching about Christianity to the Maltese people and founded the first Christian community in Malta in 60 A.D.

The St Paul’s has become a popular place of pilgrimage in the early 17th century. This place of worship has been visited by many important personalities including Pope Benedict, Pope John Paul II or Admiral Lord Nelson and many others.

In the photo above you can also see a silver vessel which was executed in 1960 to celebrate the 1900th anniversary from the shipwreck of St Paul in Malta.

The stars will lead you to the Church of St Paul with the Sanctuary of St Publius that was added on to the church in 1617. The sanctuary of St Paul is richly decorated sacred place. The author of the titular painting, showing the Virgin and Child with St John the Baptist and Publius, is a renowned Italian artist Mattia Pretti.

The next step is to visit the World War II shelters. As you can imagine shelters in Malta were crucial in order to save people’s lives during the World War II. These shelters consist of approx. 50 rooms and about 350 could find refuge during air raids.

When walking through the shelters you can notice that the rooms alongside the corridors have numbers. That’s because the local families would pay to have their own room dug up and like this can could easily find their space.

Now is time to get lost in the catacombs! And yes, this is nothing for the claustrophobic types! Joking apart, due to the fact that I was visiting the site on my own, sometimes I lost sight of the other visitors and got a bit uncomfortable. As it is quite easy to get confused in my opinion. Just be careful and either go with someone or stay close to another group of people.

The area of catacombs is just a small part of the 3rd century AD subterranean tombs, but you can still get a good idea of the different types of tombs that were used in those days.

Below you can see a small agape table which was commonly found in many hypogea (an underground chamber). It consists of a circular table with a rimmed basin-top. The early Christians probably used it for ritual meals.

When exploring the catacombs be mindful of the low ceilings so you don’t hurt yourself.

Once you exit the catacombs and the World War II shelters you will pass by this unique vintage car, Austin Six Limusine (1937), that’s still in a mint condition. This car was used by Archbishop Dom. Maurus Caruana OSB (1915-1943) and Archbishop Mgr. Michael Gonzi (1944-1976).

As I already mentioned, there is a lot to see in the Wignacourt Museum and by the time I reached the first floor I was already pretty tired. I think I need to come back to fully appreciate this part of the museum. And what can you look forward to see here?

Here on the main floor one can appreciate the a remarkable art gallery featuring works by renowned local and international artists including Mattia Preti, Antoine Favray and Francesco Zahra. There is also an impressive collection of artifacts from the church and from the Knights of St John including 17th – 19th century silver, a historical wooden alter, historical maps, pottery, coins, a collection of rare books and so much more!

This is a private chapel (below) that was used by the Chaplains of the Order of St John. 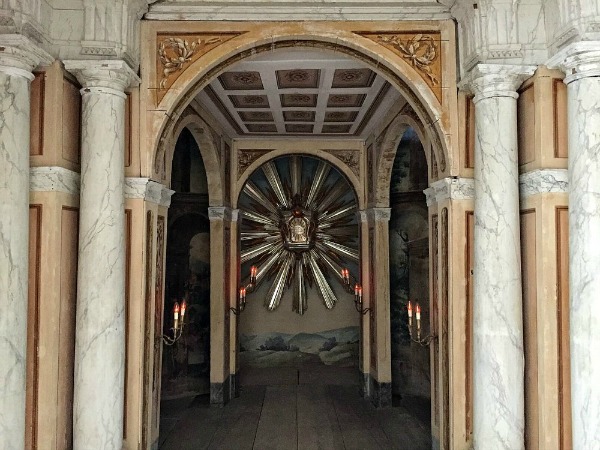 I saved the best for last! Maybe not the best, but definitely one of the highlights of the Wignacourt Museum – the Treasurer’s room! This is were the treasurer stayed and from where he could safely guard the chest that was places on the loft above the bed.

Above the Treasurer’s bed you can notice a beautifully restored 18th century headboard. The headboard is surmounted by a crown and enhanced by festoons, strolls and other decorative elements with the Immaculate Conception right at the centre.

Part of the Treasurer’s room is also a washroom. The copper bath is one of the oldest of its kind in Malta dating back to the 18th century! It’s like going back in time and walking into someone’s house about 200-300 years ago. How cool is that?

And not to forget the map with the exact location of the Wignacourt Museum for your easier orientation! Enjoy!

The Xarolla Windmill in Zurriq is the only windmill on the Maltese Islands that is still functioning! Find out more about this unique historical site by reading this blog.

Thinking of visiting Gozo but wondering if there is something to do? At the end of the day the island is only 14km long and 7km wide, but

Czech expat living in Malta and looking to rediscover what made me fall in love with the island over 10 years ago.